Walls, ceiling and woodwork painted, fire surround painted, fireplace tiles painted, shelves put up, wallpapering done, mirror put back, new light put up… not a quick job this one but worth it in the end! I can’t believe how much lighter the room feels now that it’s a cool duck egg rather than a dark red.

The floral wallpaper is called Hudson Mohair from Laura Ashley and has a pearlescent sheen (not available any more though so the pressure was on when we were trying to wallpaper round the fireplace!) 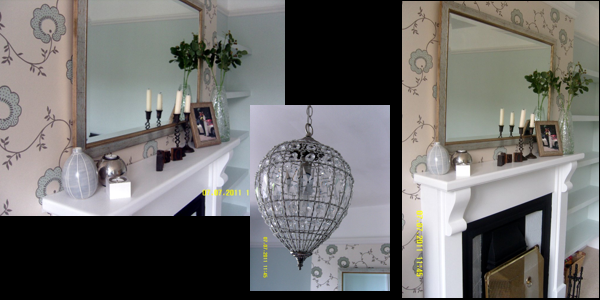 The Dante chandelier is from John Lewis and has already been described as a disco ball by my five year old but I’m hoping it adds a bit of glamour and impact to the room.

My last task is to frame some pictures I’ve been collecting for the wall behind the sofa which is looking very empty – more photos of the rest of the room to follow, I just thought I’d do a quick update now.

Even the beanbags I made back in March match the scheme…

One thought on “Did you know John Lewis sell disco balls?!”

Welcome to the gilhoolie blog – with regular updates on lampshades, drawings, interiors and all things gilhoolie. Thank you for visiting!

Click on the categories below to find things easily.